The mother of all banned book lists

WRITING DEVELOPED about 3500 B.C. and soon after people started banning it.

We're still banning it, trying to hide it, delete it, flame the writers and cancel them from the public square. The thing that's different now is you don't need a chisel as you did a few millennia ago. In the 21st Century, it only takes the swipe of a screen to eradicate a controversial, dangerous, or offensive idea.

Banning books can be controversial, dangerous or offensive to a lot of people (and we're among them). But reasonable arguments can be  made for suppressing some literature. Throughout history writing has been banned in the name of protecting unformed minds from confusing information, like religious heresy or pornography or historic racism.

Let's take a moment to examine banning and note that it doesn't mean burning. The American Library Assn. maintains a list of titles that are most often under attack at America's schools and libraries. According to the ALA website,

It's sometimes the case that opposing groups will have opposite grievance against the same book. In other words, the reasons for outrage are as varied as we are as Americans. While some people would happily go for book burning, reasonable people, fortunately, still champion free expression. ALA annually celebrates the First Amendment and the right to read with Banned Books Week in September. (Take a look at Top 100 Most Banned and Challenged Books: 2010-2019 to see what was highlighted last year.) Almost all are still available in libraries and online.

Mount students of an earlier era (up to 1966, to be exact) were aware of something known simply as the Index, a list of books proscribed by the Catholic Church for being heretical, immoral, published without a bishop's imprimatur, or insulting to the faith. The Index was shorthand for Index Librorum Prohibitorum, List of Prohibited Books, and it existed for centuries – the mother of all lists of banned books.

The Index, promulgated after the Council of Trent (1545-1563), was intended to steer faithful Catholics away from the explosion of "heretical" Protestant publishing made possible by the invention of the printing press in 1450. The motivation wasn't primarily to punish the publishers but to protect those Catholics who weren't intellectually prepared to interpret what they were reading (if they could read). The rationale was utterly paternalistic and comparable to civil authorities protecting the populace, as Jesuit theologian Joseph Hilgers, S.J., wrote in 1908 on book censorship in the Catholic Church:

Natural law empowers the father to keep away from his child bad and corrupt companions; the highest public authorities are bound to protect by stern measures, if necessary, their communities from epidemics and infectious maladies; state and police rightly allow the selling of poison and the like only under strict supervision.

The content of the Index evolved over the centuries; Galileo, Copernicus and Victor Hugo were on it but eventually fell off. René Descartes, Blaise Pascal and most of the philosophers of the Enlightenment landed on it early and stayed, as did later writers Jean-Paul Sartre André Gide. The final entry was feminist writer Simone de Beauvoir in 1958.

And although it didn't call for burning books, some very old editions of the Index were illustrated with engravings of a that very thing.

Many if not most of the important books on the Index – including those pesky Enlightenment philosophers – were on the shelves of the Mount libraries or could be obtained by inter-library loan. The only clue a student would have had that the book was problematic was a tiny rubber-stamped "Index" on the book's entry in the card catalog. Church rules required students to have the written permission of a faculty member to check out the book, but in practice Mount faculty trusted their students to have the critical reasoning to understand a work in the context of accepted Catholic pedagogy. The intent was not to ban a book, but to make sure the reader was intellectually equipped to get the most from it.

The Index came to a sudden end on June 14, 1966. Pope Paul VI issued a motu proprio, a unilateral decree by the Roman Pontiff that can't be overturned by any governing body. It was a few months after the close of the Second Vatican Council (1962-1965), which seemed to change nearly everything about the Catholic Church, from fish on Fridays to liturgies in English. The Index seemed archaic. While still directing bishops to be mindful of what their flocks were reading and watching, the Pope wrote, "The Church trusts in the mature conscience of the faithful." (For the final iteration of the Index, see the list of authors and works on the Index Librorum Prohibitorum.)

Like the ideas they represent, troublesome books will always be with us, and we should be glad. They are essential to our humanity. What does change over the decades, or millennia, is what triggers us. For example, the images of people and animals in 1st Century mosaics were chiseled away by Muslim iconoclasts for whom any depiction of nature was a heresy. Two centuries before them Christian iconoclasts destroyed murals and statues of saints and biblical characters for the same reason.

Today, images and texts in decades-old children's books and films are suddenly being challenged by newer iconoclasts and may be suppressed by some libraries fearful of offending patrons. (This is not without controversy.) Meanwhile, books on controversial topics are disappearing from the web pages of Amazon and its subsidiary Audible. Our question at MSMU is, are 21st Century students equipped to handle problematic books?

We're on the side of Pope Paul, our revered CSJ faculty of yesteryear, our faculty of today, and our unstoppable students. For some, it will always be a dangerous idea, that notion "mature conscience." But like uncomfortable ideas, it's essential to our humanity.

Posted by Vicky the Archivist at 2:48 PM 2 comments:
Email ThisBlogThis!Share to TwitterShare to FacebookShare to Pinterest
Older Posts Home
Subscribe to: Posts (Atom) 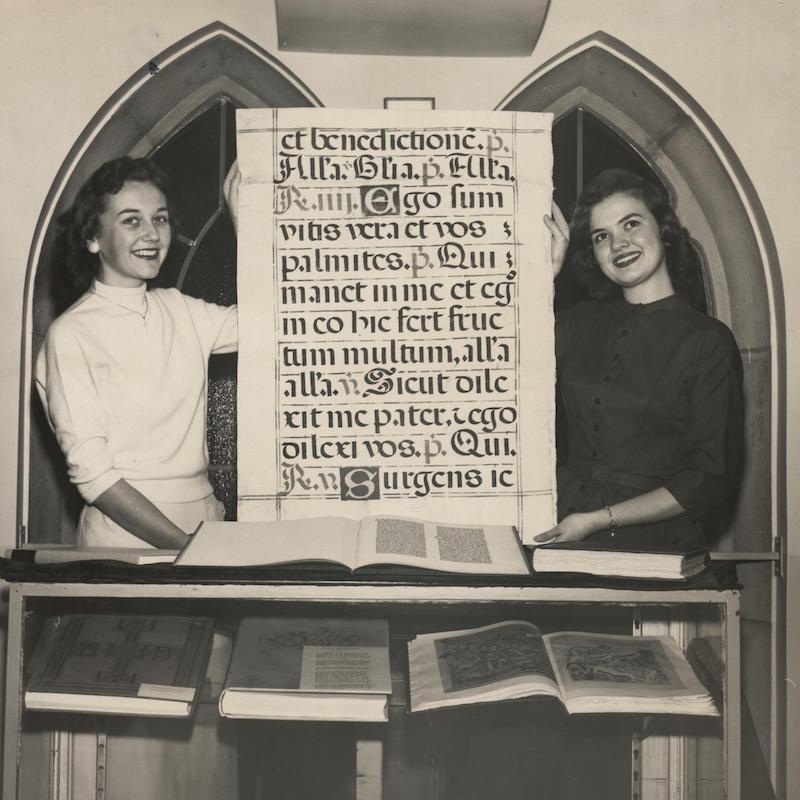 Rare books and manuscripts, university records, every publication in hard copy and digital format, pictures, scrapbooks, and more. During the pandemic, many things can be viewed online. Ask!