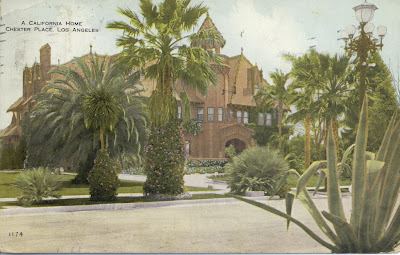 'TYPICAL' ISN'T A WORD often associated with No. 8 Chester Place, but this picture postcard with a December, 1910, postmark doesn't even identify it as the opulent home of Mr. and Mrs. Edward L. Doheny. It's just a "California Home, according to the printed caption," with grounds "typical of California yards," writes sender "C.W.B."

Here's the text of the note to Miss Grace Baker of Guide Rock, Nebraska, population 690 in 1910.

How is the Picture business coming, or have you stopped for the winter? It is like summer here and the oranges are ripening. This picture is typical of Calif. yards. Have learned to drive an auto a little and went up into Sierra Madre Mts. without a mishap Sunday. We like it fine here. Regards to your father. C.W.B. [G?] Del.

We wonder where CWB was living that gave him the idea that the Dohenys' home was just another L.A. abode. Maybe he was dazzled by all the palm trees. And what's this about the Picture business? Were people making movies in turn-of-the-century Nebraska?

In any event, if we were Miss Baker, we'd be packing our bags before the next Nebraska blizzard and on the train to the real movie capital of the world.

We have lots of other historic postcards of the anything-but-typical Chester Place on view on our repository site. Just go to http://stmary2.sdlhost.com/ and click on the Postcards box.
Posted by Vicky the Archivist at 2:22 PM No comments:
Email ThisBlogThis!Share to TwitterShare to FacebookShare to Pinterest
Newer Posts Older Posts Home
Subscribe to: Posts (Atom)