Retrospective on the riots

THE NEWS MEDIA IN LOS ANGELES have been full of retrospectives on the 20th anniversary of the so-called Rodney King riots of April, 1992. That got us thinking about the Mount's great commitment over the years to improving the lives of the poor in our city, especially in the field of education. It is a long and distinguished history -- too long for a blog, so we'll mention just one special program.

The Center for Urban Education was an initiative of the Mount's Education Department in the fall of 1965 at the 3-year-old Doheny Campus. It was the first of its kind in the nation, offering (in the language of the mid-1960s) a "three-pronged program for the preparation of teachers to enter urban problem schools." One track put students in internships at downtown-area elementary schools. The second enabled Mount students to obtain a credential or a master's degree in the urban teaching specialty. The third was a preschool division that trained teachers for work in the newly created Head Start program.

But by the time classes started on September 15, 1965, there was greater urgency than ever. The Mount's timing, it turned out, was prophetic: The announcement of the new CUE was made on Wednesday, August 4, 1965. The Watts Riots began exactly one week later, on Wednesday, August 11.

Posted by Vicky the Archivist at 9:51 AM No comments:
Email ThisBlogThis!Share to TwitterShare to FacebookShare to Pinterest

Hanging with the cousins

THE SOCIETY OF CALIFORNIA ARCHIVISTS' annual conference was held in Ventura on Friday and Saturday, providing us with an opportunity to catch up with our archival neighbors at the Getty Center, Skirball Cultural Center, USC and ONE Archives. The Mount has connections to the Museum of Ventura County, which has memorabilia from the family of Mary Irene Vujovich Ohlfs '46, and we're curious about what they may have on the Doheny "hacienda" near Santa Paula's oilfields.

The keynote speaker was Bill Deverell of the Huntington Library, who is pursuing intriguing research on how the West, especially California, became an emblem of physical healing for gravely wounded Civil War soldiers and their doctors. The restorative powers of a visit to a newly created national park like Yosemite or Yellowstone is a deep theme in the United States' western advancement. 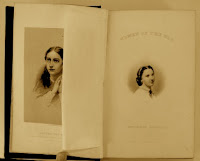 Deverell's talk reminded us that the Civil War was crucial in the development of the nursing profession, too. Hearing about the avalanche of cases of medical battle fatigue–what we know as PTSD–made us wonder about the toll the war took on nurses, who no doubt witnessed the same carnage as the doctors. Our book in special collections Women of the War by Frank Moore (1866) tells their story.

Gatherings of archivists are invigorating for us in the profession, because they remind us that future researchers like Deverell are counting on us. Yep, all that paper is indeed important. (So is that digital stuff, and everybody's having trouble with it.)
Posted by Vicky the Archivist at 11:08 AM No comments:
Email ThisBlogThis!Share to TwitterShare to FacebookShare to Pinterest 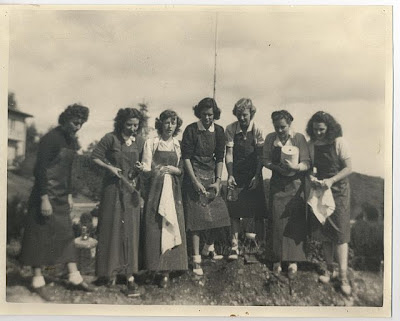 In fact, the hole in the ground is the foundation being dug for the new Charles Willard Coe Memorial Library. A note on the back of the photo says the students were "pretending to have caused it by their chemicals." 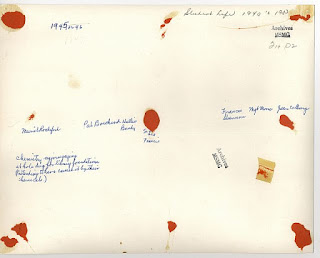 The student chemists all graduated around the time the library was dedicated, in the spring of 1947. The picture is unusual -- not because of the subject matter, but because on the back someone has taken the time to describe what's going on and named each of the students (right). For every one of these with information, there are probably 25 more that have no identification whatsoever. (And with a picture like this, how would you ever guess what's going on?)

Posted by Vicky the Archivist at 1:45 PM No comments:
Email ThisBlogThis!Share to TwitterShare to FacebookShare to Pinterest

The tradition of ivy 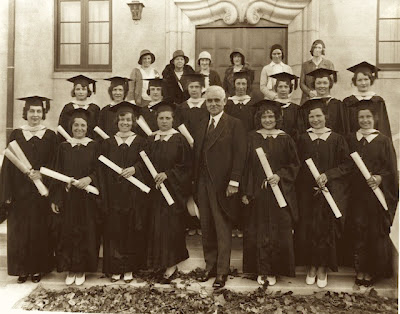 PRESIDENT McELANEY-JOHNSON has been holding town hall meetings the last couple of weeks to discussion ideas and visions for the next strategic plan. Among the topics is looking at past traditions  that would be viable today, and showcase the College's long, distinguished heritage.

Traditions? Heritage? How do you spell A-R-C-H-I-V-E-S?

This picture reminded us of one tradition we've noticed -- garlands of ivy. If you look at the feet of this group -- the Class of 1931 with commencement speaker Joseph "Mr. Los Angeles" Scott -- you'll see on the steps of the Lecture Hall festoons of fresh ivy.

We've seen a number of old commencement photos showing the juniors lining stairs and walkways for the graduating seniors, who processed across Chalon to the ceremony. The juniors all held a length of vine, creating a special route of honor.

We'll be on the lookout for other beautiful, simple traditions and will post them here.

Posted by Vicky the Archivist at 1:14 PM No comments:
Email ThisBlogThis!Share to TwitterShare to FacebookShare to Pinterest 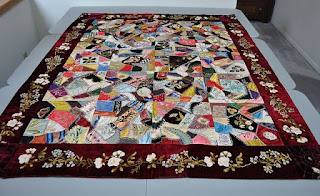 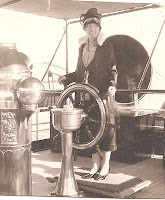 IT'S AN INTERESTING COINCIDENCE that in the past couple of weeks I've heard from not one but three different people who have a direct connection to the Doheny legacy at the Mount. We want to protect their privacy, of course, but we thought we could share a couple of pictures and dispense a little history in the process.

Information about the Doheny family in the last century is hard to come by; it's well known that Edward's widow, the papal countess Estelle Doheny, burned her husbands papers and records when he died in 1935. At the college, though, we're gradually accumulating quite a collection of secondary materials, thanks in large part to our friend Don Sloper, who turned over his research materials for his book Los Angeles' Chester Place.

Our Doheny connections called the right place. And when we hear from people like Olive's and Pietro's descendants, we always learn something, too.
Posted by Vicky the Archivist at 9:07 AM No comments:
Email ThisBlogThis!Share to TwitterShare to FacebookShare to Pinterest 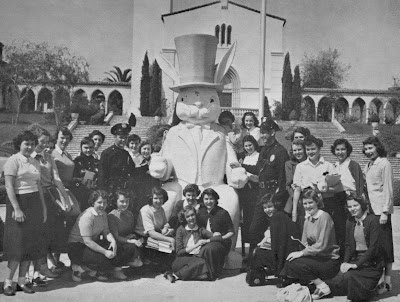 WE MAY BE A CATHOLIC COLLEGE, but the Easter Bunny sometimes plays as big a role here as anywhere else.

Mr. Bunny was front and center on March 9, 1951, when a few fraternity pranksters (thought to be from the Mount's brother school, Loyola University) "borrowed" the 10-foot, 300-pound plaster statue from in front of a store on fashionable Wilshire Boulevard and hauled him up to the Chalon Campus in the early hours of the morning.

Students arrived to see a giant rabbit in top hat and tails by the flagpole in the Circle. Police were duly alerted, and the investigating officers posed with the "hot" rabbit and a couple dozen smiling Mounties. The wandering bunny was then returned to his rightful home.

Our occasional pen-pal Beverly Halpin Carrigan '52 remembers this incident well. She reminds us that it was the year after the movie Harvey came out (in which Jimmy Stewart's best friend is a 6'3" invisible rabbit), and theaters featured giant rabbits in their lobbies.

So this Easter Bunny wasn't the only oversized, overdressed rabbit with a starring role that year. A happy, blessed Easter to all!

Postscript: Read about the missing Loyola Lion a few weeks later.
Posted by Vicky the Archivist at 9:58 AM No comments:
Email ThisBlogThis!Share to TwitterShare to FacebookShare to Pinterest 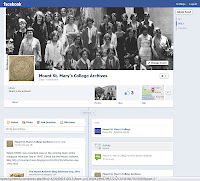 We've noted before how keeping digital media is a challenge for archivists, and we've known for a long time that a lot of the Mount's contemporary photography is ending up on the internet -- and not in the Spearman Room in the Chalon library.

Well, to see social media you've got to be in social media, so we have given up and now have the MSMC Archives page on Facebook, http://www.facebook.com/MSMCArchives, featuring a photo of the Mount student body in the late 1920s.

In addition to sharing some of our own photographic treasures, we can keep an eye on everyone else's! So next time you're in Facebook, how 'bout "Liking" the archives?

Posted by Vicky the Archivist at 4:25 PM No comments:
Email ThisBlogThis!Share to TwitterShare to FacebookShare to Pinterest 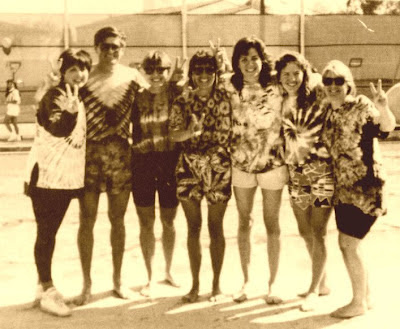 Aurora Israelson of our Women's Leadership department is looking for historic photos to display at the Athenian Awards ceremony in a couple weeks, so I browsed the Athenian Day picture archives.

The annual spring event was founded on March 16, 1991. At the inaugural event, six teams made up of faculty, students and staff took part in a series of fun (and funny) competitions, such as volleyball, raft races in the pool, an obstacle course and relays. Teams chose their names and decorated shirts to match. Closing ceremonies were held in the pool.

This photo, scanned from the 1991 Athenian yearbook, shows the winning team, called the Flower Children -- with tie-dyed shirts to match. The winning team included our own administration members Dr. Stephanie Cubba and and Dr. Mari Wadsworth. If you look closely in the photo, you'll see Dr. Cubba standing third from the right.

A front-page article in the April 1991 edition of The View, (vol. 38, No. 5), got it right when it proclaimed, "Everyone went home winners for having made this new tradition such a success." The 21st annual Athenian Day was held this year on Feb. 25.
Posted by Vicky the Archivist at 3:09 PM No comments:
Email ThisBlogThis!Share to TwitterShare to FacebookShare to Pinterest
Newer Posts Older Posts Home
Subscribe to: Posts (Atom)