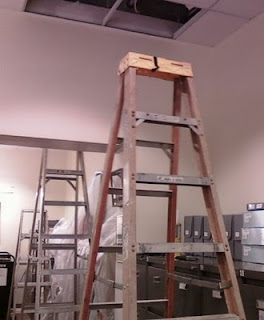 A TRIO OF MARCHING LADDERS greeted me this morning. Gregorio Garcia and Felix Miguel are wrapping up work on a system of catch pans, pipes and drains that will, I am assured, keep the leaks away from Special Collections.

This is such good news I celebrated with an extra cup of coffee. There are at least four sources of H2O above me - bathrooms, rain gutters, air ducts and HVAC pipes - and all four have dripped, dribbled or poured down water in the past three years.

Meanwhile, there are a couple dozen newly rebound or repaired books ready for reshelving. Having spent thousands of dollars on them, I've hesitated to put them back. Gregorio tells me I don't have to worry. Well, let's say I don't have to worry as much. This is still the low point of a four-story building!
Posted by Vicky the Archivist at 9:03 AM No comments:
Email ThisBlogThis!Share to TwitterShare to FacebookShare to Pinterest 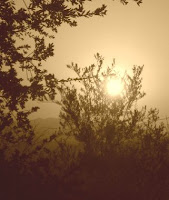 MARY IRENE'S SON, JEFF OHLFS, helped me out by writing a short bio of his mother for the collection finding aid. His notes connect a couple dots in Mount history.

According to legend, the Sisters enlisted a friend to help them look for a permanent site for the College in 1928. The friend is never named in the written or oral histories, and the story of Mother Margaret Mary Brady slogging up the steep chaparral in full habit sounds a bit embellished. But Jeff's narrative identifies this friend as Michael Vujovich, Mary Irene's father.

As I mentioned in the previous post, Mr. Vujovich was a rancher in Ventura County, and would have known a thing or two about California real estate. The CSJs would have needed a smart guide if they were going to get involved in land deals with oilmen.

In archives, it's always gratifying to put a name with an event, to find a real person taking part in real history. Somehow the old story seems less myth and more genuine. There is also the remarkable continuity of one family, the Vujovich-Ohlfs clan, staying involved with this college for more than 80 years.
Posted by Vicky the Archivist at 3:36 PM No comments:
Email ThisBlogThis!Share to TwitterShare to FacebookShare to Pinterest 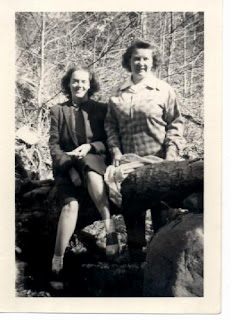 THE COLLEGE ARCHIVES ACQUIRED (the official term is accessioned) four scrapbooks today from the estate of Mary Irene Vujovich Ohlfs '46. Mary Irene, who passed away a decade ago, was a dedicated picture-taker and scrapbooker, and her son, Jeff, has been gradually handing off her Mount mementos.

The daughter of a Ventura County rancher, Mary Irene faithfully documented 50 years of the Chicks of '46, photographing every reunion, captioning the photos and including invitations and programs from each event. (She's on the right in this photo, with classmate Helen Crane.)

Scrapbook No. 1 of today's acquisition also has an unexpected trove of photos of Mary Irene as a Mount student in 1942 or -43, posing and clowning with her sorority sisters in Tau Alpha Zeta (TAZ).

Having seen innumerable pictures of my daughter and her CSUN sorority friends on Facebook, I'm struck by how some things don't change. Mary Irene was certainly the social networker of her day, in the media of handwritten notes, mimeographed invitations and a Kodak Instamatic. She would have loved Facebook. 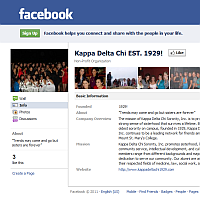 But you have to wonder what will become of the Class of 2012's digital "scrapbooks" on their Facebook pages. For example, the Mount's oldest sorority, Kappa Delta Chi (est. 1929), has a Facebook page with lots of photos not unlike Mary Irene's (although I'm sure the TAZ and KDX girls wouldn't be caught dead in each other's fashions).

In the archives there is stuff about KDX going back 86 years -- even further back than the Chicks of '46. Where are the Mary Irenes of the Class of 2012, and how do you keep a Facebook page anyway? The Library of Congress is wondering the same thing...
Posted by Vicky the Archivist at 1:07 PM No comments:
Email ThisBlogThis!Share to TwitterShare to FacebookShare to Pinterest 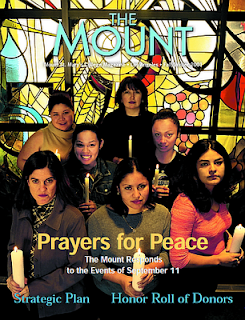 HAVE YOU EVER NOTICED the way history has of creating time warps?

While looking for some background on an alumna this afternoon, I stumbled on a copy of The Mount for Fall/Winter 2001. On the magazine cover was a small group of people holding candles. The headline said, "Prayers for Peace: The Mount Responds to the Events of Sept. 11."

I'm having as much trouble as the next person (over the age of 25, anyway) grasping that 9/11 happened 10 years ago. It seemed even harder to believe when I looked at the photograph and noticed Laura Gomez, assistant Campus Ministry director, among the group photographed in Mercy Chapel ten years ago this week. (Back row, center.)

At noon today, I attended the short prayer service in the Circle remembering the victims of 9/11. One of the leaders was none other than Laura Gomez. It was a convergence, a flash-forward that seemed to make the last decade disappear.

Like many archivists I tend to focus on the old stuff. The 2000s don't seem like history yet. But they are. Archives are able to enshrine events in a way that brings them to life in a rush, as a 10-year-old copy of a magazine will attest.

The Mount Archives has a complete run of The Mount magazine from 1982-present.
Posted by Vicky the Archivist at 1:13 PM No comments:
Email ThisBlogThis!Share to TwitterShare to FacebookShare to Pinterest

Guides to the Mount Archives

IT'S A MILESTONE OF SORTS. I've uploaded to the MSMC intranet site all the more-or-less finished "finding aids" to various collections in the Mount Archives.

There are 23 in all, the latest addition being the accreditation documents for the Physical Therapy Assistant program, 1978-2002. They're a fraction of what we've got in the files here, but they provide some basic description of what's in these filing cabinets and shelves.

There's an inventory of the papers of the college's legendary president Sr. Magdalen Coughlin (1976-1989), lists of obsolete media, guides to Beverly Carrigan's scrapbooks, along with the more prosaic -- like the PT accreditation.

If you're seeing this on the public internet, contact me if you're interested. Happy to send you an overall inventory.

Posted by Vicky the Archivist at 4:10 PM No comments:
Email ThisBlogThis!Share to TwitterShare to FacebookShare to Pinterest

BEVERLY HALPIN CARRIGAN '52, a regular Archives pen pal, did some reminiscing this week in an email about Freshman Orientation in the late 1940s when she came to the Mount.

There was no Welcome Week, Orientation or much else to get students into the campus groove. Orientation in 1948 consisted of being assigned to a Big Sister who showed you the ropes: answering questions, describing courses and teaching the finer points of Mount etiquette. The word crap was not to be used, Bev discovered. "My response was that my mom used it all the time," Bev remembers. "Needless to say I expunged it from my language."

Freshmen were required to study together in the Coe Library four nights a week "under those dreadful chandeliers," she recalls. (Evidently they cast as little light then as they do today.) The Associated Student Body and club representatives made presentations in the Little Theater (now the Hannon Theater) and you were on your own. "No, we 50 or so first-year students had to sink or swim!" Bev writes.

No problems for Bev Halpin -- from what we can see in her scrapbooks in the Archives (available for viewing), she took to college like like a duck to water. She won a scholarship to graduate school in social work, married a lawyer who is now a retired Colorado Supreme Court judge, and is very generous with her alma mater.

In 2005 Bev and her husband, Jim, created the Beverly Halpin Carrigan '52 Endowed Scholarship to promote study in social work or social science. Bev wanted to help other young women achieve what she did, to get them into the swim, so to speak, at MSMC.

Thanks for the email, Bev, and thanks for all you do for the Mount.
Posted by Vicky the Archivist at 9:27 AM No comments:
Email ThisBlogThis!Share to TwitterShare to FacebookShare to Pinterest
Newer Posts Older Posts Home
Subscribe to: Posts (Atom)