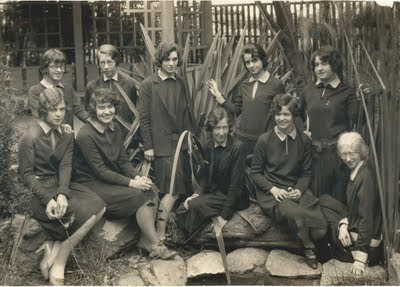 ON THE THRESHOLD of the 2011-2012 academic year, Chalon is buzzing -- although you can't hear it. People are moving a lot faster, lingering projects are finally being wrapped up (like the new 24-hour study room), the desks that got cleaned out in July (and the contents sent to the Archives) are filled with new staples and pens, and Office Depot is delivering printer paper practically by the forklift. Time to get going!

For the freshmen who might see this, here is a photo of your academic ancestors, the Class of 1929, the ones who started the school you're now attending. Things were different when they started college...
Welcome to the Mount, ladies and gentlemen. Remember that, like these young women in the picture, you'll get out of the College whatever you decide to put into it. I hope you'll make some history of your own. And aren't you glad you don't have to wear a uniform?
Posted by Vicky the Archivist at 3:24 PM No comments:
Email ThisBlogThis!Share to TwitterShare to FacebookShare to Pinterest 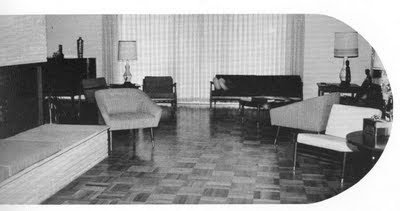 I got a look yesterday at "the Casa," the ground floor of Carondelet Hall that houses the Mount's male nursing students. I'd read that it once functioned as a real "home" and had found these pictures taken in 1959 shortly after it was built.

Home Economics was a big major in the 1950s and 1960s. The Casa Marguerita, named for department founder Sister Marguerite Ellard, CSJ, was built into the new Carondelet Hall as a state-of-the-art laboratory. Teams of a half-dozen upper-division Home Ec majors would live as a family in the eight-room apartment for six weeks, responsible for putting theory into practice: household budgeting, meal planning, shopping, cooking, laundry and sewing. The Casa had (and still has) its own entrance and can't be accessed from the rest of the building, so it really had a set-apart quality that enhanced the lab experience.

These photos from The Mount 1960 show that the living room had a fireplace (at left in the upper picture) and was decorated with the sleek Danish Modern furniture popular at the time. A wall of glass sliders opened onto an ocean-view terrace and patio -- perfect for sunset soirées in keeping with the Brentwood Heights locale. Students cooked in an ultramodern "all-electric" kitchen with built-in appliances, just like the new subdivisions going up all over Southern California. Roomier-than-usual bedrooms (it was, after all, a dorm) and a vibrantly green-tiled bathroom completed the "home."

Times and culture change. Home Economics fell out of popularity as an academic major in the 1970s as women entered the job market and sought equality in the workplace. (It lives on in some places, including CSUN, as "Family and Consumer Sciences"). The fireplace and kitchen went away just a few years ago to create more sleeping space.

All that's left of the upscale ambience is the green tile and the million-dollar view from the west-facing rooms.
Posted by Vicky the Archivist at 8:31 AM 2 comments:
Email ThisBlogThis!Share to TwitterShare to FacebookShare to Pinterest 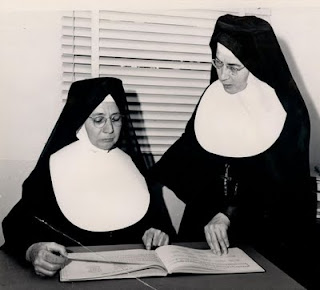 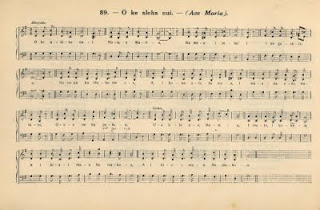 THAT'S HOW YOU SAY IT in Hawaiian. In Latin, Ave Maria; in English, Hail Mary.

One of the small treasures in the Mount Libraries' Special Collections is Lira Katolika, a rare 1935 edition of Catholic hymns translated into Hawaiian.

It's not clear how the College ended up with it. It's in neither the online catalog nor old card files, and it lacks the usual donor information in pencil on the title page. However, a small typewritten note from the benefactor is pasted on an endpaper: "This book is rare. Only a few copies were made. I was fortunate to secure one for you. Aloha."

It must have been a pretty big deal when the Mount acquired it, because I came across a black-and-white publicity photo of the head librarian, Sister Catherine Anita Fitzgerald (left), looking it over with another Sister. There's no date on the photo, but Sister Catherine Anita ran the library from the late 1940s until 1971, so the picture could have been taken any time over a 20-year span. The photo might have appeared in The Tidings, The View, or even the Los Angeles Times.

The hymnal (in English, Catholic Lyre) is almost entirely in Hawaiian so it's hard to recognize any Catholic classics. An 1886 version was found among the papers of St. Damien of Molokai, who no doubt sang Hawaiian hymns with his many parishioners all over the Islands before his heroic mission among the lepers.

As far as I can tell, the only other library copy in the world is in the rare books at the University of Hawaii's Manoa campus.

If you're a member of the Mount's Hawaiian/Polynesian club, Na Pua O'Ka Aina, and want to practice your Hawaiian, stop by the archives!
Posted by Vicky the Archivist at 2:33 PM No comments:
Email ThisBlogThis!Share to TwitterShare to FacebookShare to Pinterest
Newer Posts Older Posts Home
Subscribe to: Posts (Atom)