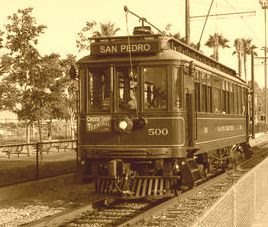 I have a dim childhood memory of riding the Red Car with my mother. We boarded in San Pedro, I in a frilly dress and she in hat and gloves, to go shopping Downtown at the big department stores on 7th Street. I'm guessing it was about 1956, not long before the opening of the Harbor Freeway.

There's a second dim memory from around the same time, of gliding up the new freeway in my dad's used Mercury, on our way to visit my grandmother in Hollywood. The Four-Level Interchange was so beautifully landscaped that I remember thinking it must have been some kind of temple.

The received wisdom in Los Angeles is that the Pacific Electric Railway and its Red Cars were a marvelous public transit system that would be here today, were it not for greedy automakers, oil barons, tire manufacturers and their tame politicians in the 1950s. Insidious blight in the form of cars, freeways and gas stations put an end to enlightened mass transit from which we're still suffering.

What brought all this to mind the other day was the closing of the big Borders in Sherman Oaks, just a few months after the demise of Barnes & Noble in my Valley neighborhood. Unbelievably, there are no longer any mainstream bookstores in mine or the nearby zip codes. Corporate mismanagement, greedy landowners and savvy technology companies get the blame this time for replacing real books with Kindles and Nooks and iPads.

People aren't being forced into newer, better, cooler ways to read books. They're doing it willingly, in big numbers, just the way people flocked to cars and freeways in the 1950s. For two generations, Mount students could hop a shuttle to Westwood and the nearest Red Car stop. But when you can drive, why would you put up with the discomfort and noise of the railway or inconvenience of a shuttle schedule? And who thought about pollution?

I love books. I'm surrounded by them in the Mount library. I also love my iPad. Say, weren't bookstores great? But I wonder... were free wireless and a coffee bar next door a such a hot idea? It seems the same as handing out coupons for free tires and gasoline to people boarding the Red Car. 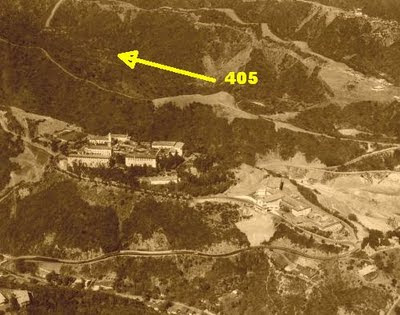 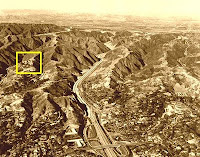 AMID ALL THE NEWS COVERAGE of this weekend's "Carmageddon" shutdown of the 405 have been historic pictures of the Sepulveda Pass. This impossibly busy thoroughfare didn't get a paved road until the 1920s, so the photos are fun to look at. If you know where to look, you can see Mount St. Mary's College.

The small picture at right from 1961 (before the Bel Air Fire) was reproduced in the Los Angeles Times, and I've marked the College in yellow. It really shows what a visible landmark the College was in the 70 years before the Getty Center was built.

The picture at top is taken from the west in 1956 or -57. Alone on its hill, the College could see -- and be seen from -- much of Los Angeles. It's astonishing to see how bare the canyon was in those days before the 405 pushed through.

Our oldest alumnae still long for the days when you could see the Mount from Santa Monica, the only light source in the otherwise black mountain front. The shrine to Our Lady of the Mount on the western slope was lit up all night and served as a beacon to boats out on the Bay.

As the college grew, so did its nighttime signature. One night early in World War II, a panicky neighbor called the college to demand that the spotlights illuminating Mary Chapel be doused immediately lest the Japanese home in on them and bomb the Westside. The College complied.

A few people express quiet regret about the loss of the Mount's landmark prominence in the shadow of the Getty. One of the CSJs told me last year that the community had always been told that their 180-degree view from Carondelet Center was to be "preserved in perpetuity," and that the entire canyon was part of some kind of "trust" that would prevent construction. The sisters were as surprised as anyone when the Getty Trust proved otherwise.

The college is closing for Carmageddon (as is the Getty). It's hard enough to get here on a normal day! For one weekend, though, the Sepulveda Pass will revert to impassable and the Mount will enjoy a bit of its old solitude.
Posted by Vicky the Archivist at 12:02 PM 1 comment:
Email ThisBlogThis!Share to TwitterShare to FacebookShare to Pinterest

Fire on the mountain 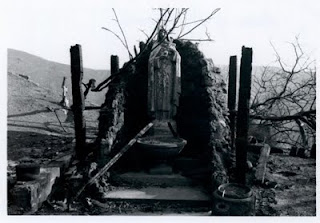 PAUL MARTIN'S comment about preserving archives from fire is timely. This November 6 we'll mark the 50th anniversary of the Bel Air Fire.

Nothing makes a statement about the devastation more than this sad snapshot of the shrine of St. Therese of Lisieux on the eastern edge of the Chalon Campus. The shrine was built in 1946 and dedicated on October 3 that year, the feast day of the beloved Carmelite saint known as the Little Flower.

She watched over the Circle for the next 15 years until that Monday of midterms week, when a spark from a construction site turned into a raging orange hell of wind and flame. After the fire did the unexpected and jumped the new 405 freeway in the Sepulveda Pass, the Mount was directly in its path.

The fire raced up the eastern canyon, turning a row of eucalyptus trees at the edge of campus into a wall of torches. Windborne cinders ignited the wooden eaves of Rossiter Hall and St. Therese's shrine as it headed south along the canyon wall.

Only Rossiter's walls were left standing. The fire mostly skipped St. Joseph Hall but renewed its fury on the Carondelets' House of Studies (now Carondelet Center), burning off portions of the pantiled roofs as it continued into the residential streets below. The fire also blew west, destroying the Mount Bowl, a beautiful outdoor amphitheater, and the Marian Hall of Fine Arts, which housed the music and art departments with all their instruments and equipment. At one point, the Chalon Campus was almost completely surrounded by fire. By all accounts, there was a lot of heroism in saving the campus.

Remarkably, the College was closed only one day, thanks to cleanup efforts by scores of students, faculty, staff and volunteers. St. Therese got a new shrine the following spring. Funds were raised, buildings rebuilt and one of the biggest disasters in California history faded into memory.

Could it happen again? Of course. In fact, the Bel Air Fire of 1961 was actually the second or third time the College was in imminent danger of destruction by brush fire, going right back to the beginning in the 1930s. The threat goes with being the last outpost before the chaparral begins. It goes with Chalon's spectacular location.

Yes, I worry about this room full of paper. I'm marking a little anniversary of my own this week. Two years ago, a brush crew from the Getty Center ignited the chaparral east of the campus. Returning from a trip to Doheny, I saw the fire as I drove up the hill. I raced up Bundy, hoping to get at least a few things out of the Archives before the campus was evacuated. But I was turned away at the gate.

Fortunately, it was a windless day, and fire crews were able to stop the flames at the ridgeline. The College Archives was safe.

But as 1961 showed us, it doesn't always work out that way. Archives preservation is a millennia-old story of almost complete loss, and all I have to do is smell a hint of smoke on the breeze to be reminded. St. Therese, pray for us.
Posted by Vicky the Archivist at 10:02 AM No comments:
Email ThisBlogThis!Share to TwitterShare to FacebookShare to Pinterest

More water from on high 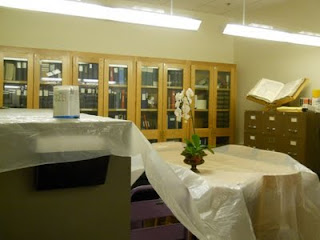 WHAT WOULD THE ARCHIVIST DO without plastic? When I heard the steady drip, drip, drip on the ceiling tiles the other day, all I had to do was unfurl some of the plastic stashed in a convenient corner, the same stuff that covered the shelves and cabinets for three months earlier this year.


This is my fourth leak at the Mount since I started in 2008. The Coe Library has very special hydrophysics, in which all water from above ends up in this room.

This is not unexpected, but predictable doesn't mean it's not a serious problem. The public restroom next to the President's Conference Room two floors up has a toilet prone to overflowing. So prone, evidently, that few people bother to report it. It merrily gushes forth for an hour or so before the water reaches me.

I have hopes it'll be fixed -- mostly because there's a big electrical transformer between it and the Archives. If water can be stopped from reaching there, I'll be 'ome and dry, as the English say.

Then there's the temperature. I log the daily high and low along with relative humidity -- both 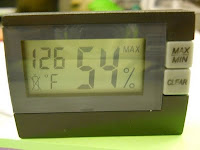 crucial to not cooking the rare books too quickly. (The higher the temperature, the faster the chemical reaction.) Picture my surprise when I returned from vacation recently to see that in one week the local environment had soared to an unbelievable 126 degrees.

On the other end, 65 was much more like it. But that 6% humidity! Pity the poor leather bindings on these old fellows. 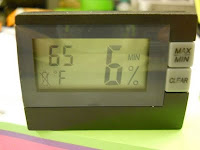 These problems are part of the quotidian challenges for archives. A little extreme, perhaps, but all in a day's work. However, the real problem is accepting material for the archives and knowing we may not be able to keep it safe.

Posted by Vicky the Archivist at 9:31 AM 2 comments:
Email ThisBlogThis!Share to TwitterShare to FacebookShare to Pinterest
Newer Posts Older Posts Home
Subscribe to: Posts (Atom)